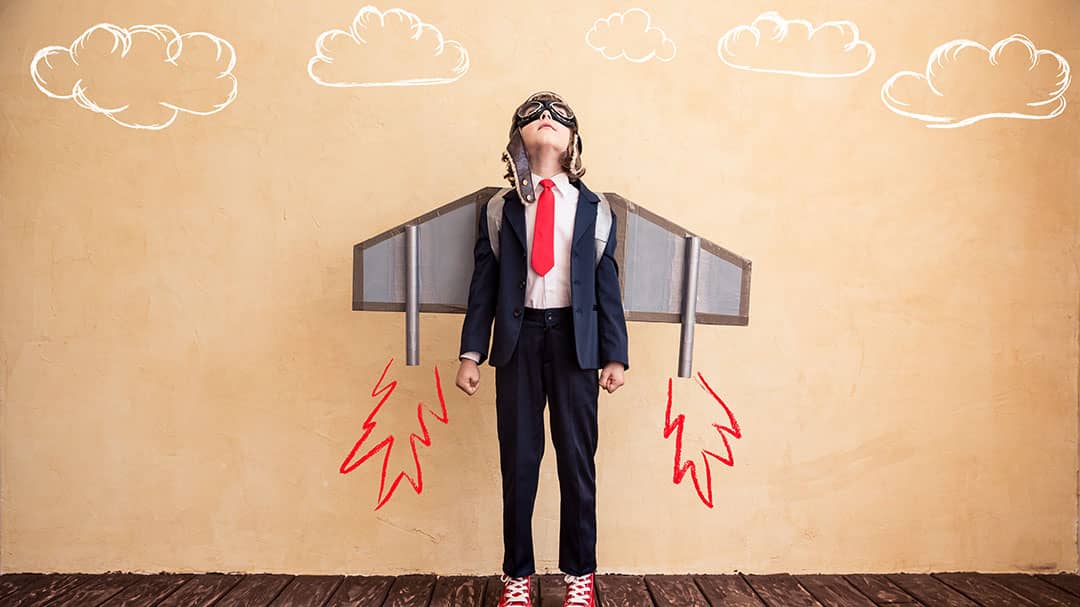 In 1961 John F Kennedy proposed that the US “should commit itself to achieving the goal, before this decade is out, of landing a man on the moon and returning him safely to the earth.”

At the time of this speech, the furthest the US had gone into space was 116 miles, and they had stayed there for a total of 15 minutes.

To achieve this feat, they needed to build a rocket big enough and invent a new fuel that could take a spaceship 240 thousand miles across space. That’s 2 000 times further than they had ever gone before.

Less than ten years later, on July 20 1969, Neil Armstrong became the first person to walk on the moon.

All this seemed like an impossible leap compared to what they had achieved thus far. So how did they do it?

There are a few principles that visionaries use to turn their dreams into reality.

When Kennedy made the speech and set the nation’s goal in 1961, the US was losing the space race by any measure. The Soviets had been the first to launch satellites and the first to put a man into space.

He realized that there was no way to catch up in the short term. Trying to beat them in the coming weeks and months would be pointless.

In the same way, if we focus on what we can do tomorrow, we’ll miss out on what’s possible in ten years.

We can only achieve what is practical and realistic in the short term. Thinking at least five years and preferably 20 years in advance is where the magic happens.

All obstacles and constraints can be resolved in the long term.

Most people who are successful got there by dedicating themselves to a long-term vision.

We can’t all achieve the same success, but we can only become the best version of ourselves by persevering for years.

In 1961 the US did not have the technology to go to the moon. They had not yet even invented the fuel that will take them there.

It was the equivalent of planning to drive a truck across the continent before diesel was invented.

Up to this point, no man had even ventured outside of his spaceship.

When Amazon started in July 1994, no official online sale had been made as yet. The technology in the way we understand eCommerce today just didn’t exist. Less than 1% of Americans were online, while today, there are over 3 billion internet users.

Both Kennedy and Bezos researched to realize that while what they want to achieve was not possible on day one, it would be in 10 years.

Close your eyes for a moment and think to yourself, what is the most ambitious target you could set for your business over the next ten years. Don’t think about what’s possible right now or what is practical.

Move your mind to a place ten years from now and consider what the world will look like then. What technology will be available in your industry?

Forget about next month or next year.

Consider what will be possible a decade from now and how you will benefit from it.

Focus on one big end goal

We will always be limited by our resources, whether it’s time or money.

Kennedy could only get Congress to allocate so much money from the national budget. Bezos could only raise so much capital from investors.

The time we have, both in a day and on this earth, is limited.

Your business, in the same way, has a limited number of resources. The amount of financial, physical, and human resources available to you will always have a limit.

The further you try to spread your resources, the thinner your results will be.

If you take your focus off your single most important goal, you will dilute the results.

While there may be many little milestones along the way, these milestones need to lead to one important goal.

While raising funds or training might not be your goal, they will enable you to reach your target.

When you are thinking about a 10-year goal, then taking three years to upskill doesn’t seem like a long time at all.

If you have only one long term goal, it’s easier to wake up every day and ask yourself whether you are headed in the right direction or not.

A vision needs to be clear and unambiguous

Kennedy promised, in 1961, to land a man on the moon before the end of the decade and safely return him to earth.

If, instead, by 1972, they managed to get an unmanned spacecraft close enough to the moon to take some great photos, they have not achieved their goal.

They have done some great work and achieved something incredible, but that wasn’t the end goal.

Nobody will disagree that they have not achieved their goal within the timeline specified.

We often sabotage ourselves when we provide our team with fuzzy and ambiguous goals.

Business goals, like being the ‘best in our industry’ or ‘leading provider’ don’t mean much at all.

Different people will think that the best means something different to them.

One team may think that the best manufacturing business produces the most affordable products. Another team will think it means the highest quality products.

This ambiguity will cause very different behaviour and make decision making impossible.

The goal must be clear so that everyone, including yourself, knows precisely what success means.

Having a clear goal helps everyone on the team put all their effort in the same direction.

Don’t get stuck on the how

You won’t have all the answers on day one, especially for long term goals.

When Kennedy asked NASA to take his nation to the moon, he had no idea how they would do it. Most of the technology didn’t even exist yet.

He was no rocket scientist and could certainly not explain to them how they should go about achieving the goal.

Allowing your team to come up with the ‘How’ will create a far more engaged culture. Your team will surprise you with new solutions that you never considered.

By dictating or deciding upfront how the problem will be solved, you won’t leave any room for innovation.

By only looking at goals that you have the solutions for, you’ll miss out on the more ambitious goals that don’t have answers as yet.

If you are only targeting goals where the path is known, you will be competing with everyone else who also knows the way. Whoever has the most resources will easily win.

If you target goals with no known answers, you can leap ahead of your competitors when you have a breakthrough.

Leaders need to define the ‘What’ and leave the ‘How’ up to their team.

Motivate your team with the ‘Why’

The end goal needs to have a ‘Why’ to motivate either yourself, your team or the whole country.

We often default to money for business motivation, but people also crave to be part of something bigger than themselves.

One of the strongest motivators is to be part of something great.

Jeff Bezos gave up an excellent paycheck and risked everything he had to create something amazing.

Astronauts risked their lives, and unfortunately, some lost their lives to be part of the team that went to the moon.

Many sportspeople play through injuries risking permanent damage so that they can help the team win.

Nations, fans, and employees rally being these people to feel as though they were part of the success.

How to Become the Best Business in the World